In this self-portrait, the artist commemorates the changes in his country. The boat in his left hand refers to the maritime history of Oman. Sea navigation is known to have been practiced by Omani sea farers since the most ancient ages.

The book in the right hand refers to the development in the country. The education of both young and adults has been given high priority in the development of the Sultanate.

The well-known artist, whose paintings were featured in several prestigious national and international exhibitions, was also member of the Omani Society for Fine Arts and still inspires young contemporary artists. The Omani Society for Fine Arts is a non-profit organisation working under the auspices of the Diwan of the Royal Court since 1993 to promote fine art and artists in the Sultanate and abroad. 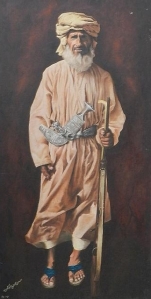 One thought on “The Scream”