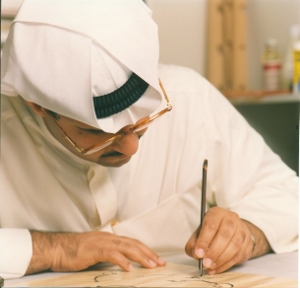 The Kuwaiti Calligrapher Ali Al-Baddah makes  Arabic calligraphy  accessible to a wider audience.  He creates modern art by using  calligraphy. The workshop he lead five days in the Omani Society for Fine Arts in Salalah-Dhofar is an example of this. His works were not only selected by HH the Amir of Kuwait, he was awarded several prices in the Art of Arabic calligraphy. He also represented Kuwait in several Festivals and Foreign Exhibitions and participated in International competitions. In 2002 in Iran among 2100 calligraphic works of 48 countries only 30 calligraphers were awarded. Ali Al-Baddah was one of them.