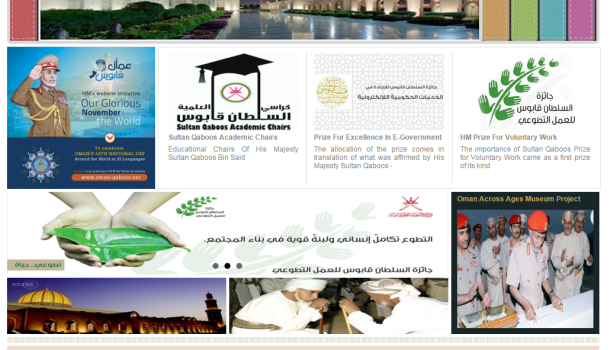 An sms from my local telecom operator with the message “Let’s celebrate everything that brings us closer together in #OurOman on the occasion of the 45th National Day…,” reminds me that National Day is coming closer. 18th of November 1940, Sultan Qaboos was born in Salalah in southern Oman. Thirty years later, 23 July 1970, he started with the modernization of the country, the so-called Renaissance. But preparations of the National Day commenced already in the October. The launching of the initiative ‘Our glorious November Around the World,’ is such an example. In Salalah-Dhofar, artist ‘Salem Omar Almarhoon,’ expressed his gratitude and joy in another way….

The sculpture of the artist in front of the entrance door of the Omani Society for Fine Arts brings homage to Sultan Qaboos. He sculpted the shape of the country in white limestone. For the decoration, parts of the text of the National Anthem, he worked together with calligraphist Sami Alqhawi. The frame in the form of a traditional door refers to the past, before Sultan Qaboos took over power. The shape of the country bursts out of the frame and symbolizes the modernization that is still in progress and is done in a friendly way in cooperation with the neighbouring countries without being restricted in the own borders. The idea of the sculpture came along with the return of Sultan Qaboos in March 2015 to his beloved country after a successful medical treatment in Germany and fitted in a program from the Omani Society for Fine Arts where artists could express the happiness of the people of His Majesty’s return.